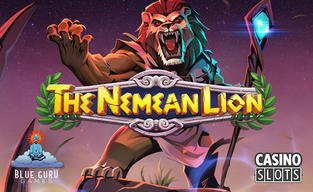 The Nemean Lion online slot has just arrived at online casinos via Blue Guru Games. It’s the first release from this developer and is now available at some of the biggest sites. Having become part of the LeoVegas Group’s investment arm in 2021, Blue Guru Games has ambitions to deliver many more slots in the future. The studio now consists of a team of 30 and they plan to launch in the USA later in 2022.

About The Nemean Lion

This 5-reel, 40-line desktop and mobile slot has an Ancient Greek gods and legendary animals theme. It uses high-end cartoon graphics and comes with features such as scatter symbols that trigger a free spins bonus round. It joins other popular Greek-themed games such as Age of the Gods: Apollo Power, and Mega Fortune at LeoVegas and other sites.

Andrew Braithwaite, CEO of Blue Guru Games, said: “It's really nice to be releasing our first game. This is an important milestone of course and there's so much more to come. We're particularly excited about the US which provides such an exciting opportunity. We’re a great team having lots of fun making games, and we can't wait to get our ideas out and see them played!”

Blue Guru Games’ first game launch is a milestone. It is fantastic to see how quickly they have moved from concept to inception and a real testament to the strong commitment and entrepreneurship we have within the Group and our portfolio companies.

Age of the Gods