Exactly one year after the launch of livecasino.com dedicated to live dealer entertainment, in May 2021 LeoVegas came into the limelight again, announcing the setting up of Blue Guru Games, the Group’s own game studio. The newly-established software company is intended to create exclusive content for Leo’s numerous brands, as well as for other operators that work in the regulated markets.

Sorry, there are no casinos by Blue Guru Games available in your country. Try these casinos instead.

Who Are Blue Gurus?

Management of the LeoVegas Mobile Gaming Group didn’t rush to share with the gambling community details about Blue Guru Games, therefore little is known of the people behind this software developer. Namely, the company is led by a team of professionals with over 20 years of experience in game development, which also rely on the rich expertise of LeoVegas.

One of the innovative brands of LeoVentures that owns 85% of the newly-formed entity, Blue Guru Games joined Pixel.bet, CasinoGrounds, and SharedPlay – companies who had already taken advantage of capital, knowledge, and unique opportunities to grow offered by the Group. However, in contrast to SharedPlay focused on transforming solitary game sessions into engaging real-time multiplayer entertainment, Blue Guru is going to design a wide variety of products, from local games to cater to the whims of players in certain markets to universally sought-after adventures.

The ambitious plan is to deliver at least 20 top-notch titles in the next two years, meaning that by the middle of 2023, online casino punters will be able to see an impressive portfolio from this studio. Taking into account LeoVegas’ promise to create only games truly enjoyed by customers, there is no doubt, players can count on something really special and incredibly exciting.

Even though at the moment the future library of Blue Guru is a kind of mystery wrapped in an enigma, there are a couple of things that are known for sure. First of all, regardless of the type of games and vertical, they are intended to fit into, rest assured, those high-tech wonders will be great performers across all smartphones and tablets. If anything, LeoVegas was founded in 2012 as a mobile casino business and a Mobile-First approach has always been their priority.

Unique characters are another interesting detail that draws the attention of the broad international audience – players traditionally love games that stand out from the crowd and do not use the same themes and symbols over and over again. It’s safe to say that investing in Blue Guru Games, LeoVegas is striving to take the idea of exclusive experience to the next level literally, offering immersive proprietary stories that no one else has. On the other side, it cannot be excluded that the Group would benefit from the flexibility of using its IP rights, making the most of their masterpieces.

Part of LeoVegas’ expansion strategy, Blue Guru Games is off to a flying start with the first titles to be released at the end of 2021. No doubt, in-house built content will let the Group further strengthen its position across the regulated markets while mobile players will enjoy ground-breaking games created to bring fun to the small screens of ever-popular portable devices. 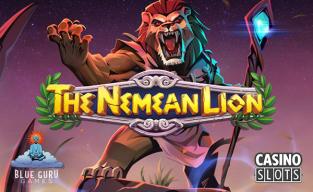 Blue Guru Games is a brand-new online casino games developer and their debut slot, The Nemean Lion has just arrived to great acclaim.