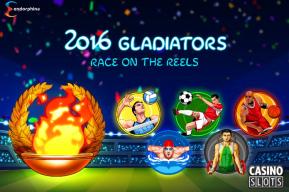 The Olympic Games come along every two years, with the winter and summer games alternating turns. This is a time when athletes and competitors from all across the world come together to see who is the best, and for many types of competitions, it's one of the major events for the sport, on the same level as world championship tournaments. Now Endorphina has made their own version of the Olympics with their 2016 Gladiators online slot.

This game uses a somewhat atypical layout. There are five reels and three rows, which is normal enough. However, it uses 21 paylines, something that you very rarely see. This causes some fairly atypical bet sizes since you can choose your total bet size per payline. For example, if you choose to place a bet of $0.01 per payline, you'll be wagering $0.21 per spin, which is obviously not a standard wager size. This adds a bit of fun to the game since it stands out right away as being a little odd, but there's nothing weird about the payouts.

A ton of different Olympic events are referenced with symbols in this game. You'll see weight lifting equipment, ping pong paddles, fencing equipment, boxing gloves, swimmers, soccer players and more. It's a very well-rounded slot that covers all kinds of different sports that are played at the Olympics, and that makes it stand out a bit compared to other sports-based slots that are usually focused on just one game. Overall, it's a very inclusive way of handling the theme.

While the name of the game is 2016 Gladiators, there's a lot more going on for Endorphina in 2016. They have tried to make 2016 the year that they really break out, but it hasn't necessarily went the way that they've wanted it to with as competitive as the market has been this year, particularly in the online slot sector. While this company has had some new releases, they're going to have to keep up the pressure if they want to carve out as much of the market as possible for themselves in this hyper-competitive environment.

If you're looking for somewhere to check out this game, we recommend BitStarz Casino.