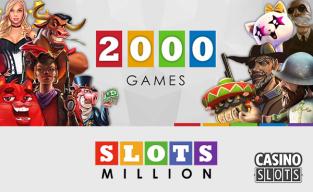 SlotsMillion's whole theme is having as many games from as many high-end providers as possible. They've recently hit a major milestone along these lines by breaking the 2,000-game mark. They are in an elite group since only a handful of sites have come anywhere close to having this many games, and a big part of the reason they are able to make this work is because they have deals with so many great developers.

Something really interesting about how this casino has put together their game selection is that they have content distribution deals with a ton of different software developers. This includes many whose games can't be found all that frequently like Nobile, Red Tiger, Old Skool, Felix and Red Rake. All of these companies have high-quality titles to a serious degree, but they don't have that many games individually. However, they come together on this platform to give players a very impressive array of options that include the best selection of top-end video slots that you can find anywhere in the industry.

Celebrate with a New Promotion

To celebrate this big milestone event, SlotsMillion is putting on a value-packed promotion through August 14, 2017. New players are able to use the 2KGAMES promo code to register and get a big welcome offer. This comes in the form of a 50 percent match bonus on your second deposit worth up to €200. This only requires a minimum deposit of €20, and it's on top of their usual welcome bonus package, which is pretty strong itself.

SlotsMillion has over 2,000 games for desktop and more than 1,000 mobile slots. On top of that, they are the world's very first virtual reality casino, allowing players to get in on the action with dozens of the most popular games in their selection. You can walk through this virtual casino and play games like you would in a regular casino whether you have a VR headset or not.

Like the rest of their software, you can enjoy it on desktop or mobile, and it's built on a very flexible platform that gives players the ability to play from a wide range of computers or mobile devices. We'll be interested to see how much longer they can go before they break another major milestone, and we're excited to see what they have to offer when that happens.