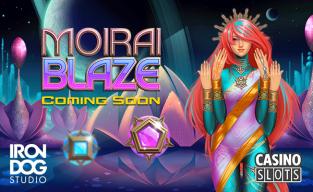 Moirai Blaze is a new slot that's just been announced by Iron Dog Studios and is set for relase on 22nd August. The game is themed around the traditional Hindu festival of lights and sees Diwali and Vishnu coming together in a special free spins feature. Exploding symbols, wild substitutions and win multipliers are also available in this colourful game.

Symbols are displayed in a 7x7 grid pattern, which is set against a dreamy landscape of planets, alien plants and where Lakshimi, the Goddess of Wealth stands to one side of the game. This red-haired deity reveals how much is won in each spin when symbols line up in blocks of between 5 and 49. Any winning lines or blocks of symbols will vanish to leave empty spaces into which new symbols will tumble down to fill the gaps.

The magical crystal symbols are supplemented by a Wild icon that can act as any other, while a special Replacer symbol can turn any type of symbol into any other if needed. It can also create matching patterns of symbols in a cross shape.

A golden Exploder symbol destroys others in a cross and diagonal shape, or all symbols of a randomly chosen type, leaving a wild symbol in its place.

If more than 100 symbols are destroyed or replaced in a single spin and during the tumbling reels feature, players are awarded 15 free spins. Any Wild, Exploder, or Replacer symbols seen during the first 14 bonus spins are collected in a special meter and all are added back onto the reels for the final spin. The Replacer symbol will always add Wilds to the game matrix during any free games.

Another bonus during the free games is the potential to land a Ganesha Powerball symbol. It awards an extra spin, while also increasing any win multipliers. Bonus symbols and features can also be triggered automatically, once enough tumbling reels events have taken place, so punters are sure to be awarded a feature.

Moirai Blaze is fully compatible with desktop and mobile platforms. It has a medium to high volatility and features a return to player percentage of 96.1%. It's set for release on 22nd August 2018, and the combination of stunning graphics, fascinating design and exciting gameplay is surely going to turn Moirai Blaze into another hit for Iron Dog Studio.