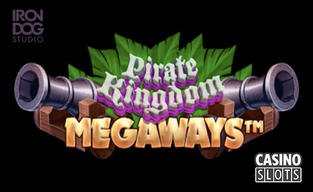 Prepare for the launch of Pirate Kingdom Megaways. This new slot from Iron Dog Studio sets sail across online casinos from 2nd December and players can join the motley crew at sites that use Microgaming software.

The crew sails the Caribbean raiding ships for their valuable cargo. An image of the ship and barrels of booty floating on the waves sits behind the six reels of the Pirate Kingdom Megaways slot machine.

It uses the Megaways system under license from Big Time Gaming. Reels could have as few as 2 symbols on them, or as many as 7, changing at random in each spin. It gives players between 64 and 117,649 different ways to win across the reels. Winning symbols vanish, to be replaced by new ones dropping down from above. This carries on until no new winning combinations are seen, so players could land several wins from a single stake.

A pair of crossed pistols are wild, acting as others to complete combinations. They come in standard form, or as multiplier wilds, which double the value of any win-lines they help to create. What's even better is that multiple wilds combine, so landing 3 on a line will boost a win by 8x over.

A free games round also helps players to grab some booty from online and mobile casinos. Any sequence of 4 or more tumbles will fill a win meter to the right of the reels. Once the tumbles end, players are awarded up to 14 free spins. During this round, any 7-high reels lock in place for remaining spins, making it easier to see wins across the game.

An increasing multiplier applies to tumbles in the free games. It has the potential to bring in some huge hauls from the Pirate Kingdom Megaways slots game.

Players can stake between 0.20 and 500.00 on a spin of the reels. The game is fully optimised to play on desktop PCs, laptops, iOS, and Android mobiles. It has a very high volatility and average returns of 96.20%.

Get ready to take to the high seas when Pirate Kingdom Megaways is launched on December 2nd, 2019.