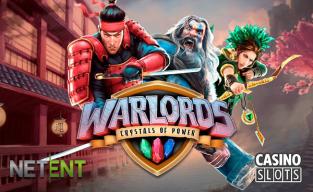 Net Entertainment has shown that they aren't resting on their laurels for the remainder of 2016. Instead, they have released yet another new title, and this time, it's Warlords: Crystals of Power. This game features a theme that will appeal to a wide range of players, and it's completely jam-packed with different bonus features and ways to get paid. Overall, this looks like an exciting new release, and it creates the question of whether or not they will even look to go further and release at least one more new title before the end of the year.

Details on This New Release

This new game has a fairly normal layout with five reels, three rows and 30 paylines of action. Net Entertainment doesn't really have a history of getting outside of the normal set of formats for their games, so this much isn't particularly surprising. There are three warlords that dominate the story behind this game with the Samurai, the Priestess and the Barbarian, and they're looking to duke it out to see who comes out on top once and for all.

There are three different bonus features in this game, each of them tied to one of these three main characters, and they are all free spin rounds. This is a cool way of tying the theme to the bonus features, something that NetEnt does often and that usually leads to a pretty fluid game experience for players. This is another example of this company putting together a title based on their own themes instead of relying on those from movies, television and other forms of media, even though they use those brands very well at times also.

What Will NetEnt Do Next?

Net Entertainment has had an incredible 2016. They released titles in the NetEnt Rocks! line of games, including the highly anticipated Guns N' Roses slot that had a buildup of several months. They also came out with a number of other titles on top of getting their games onto new platforms and in front of tons of new players. With such a good year behind them, they are hitting 2017 running, and they will be sure to make good use of this momentum in the new year.