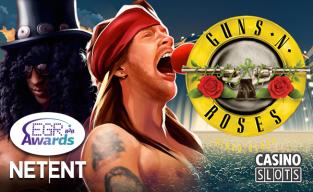 This year, the Guns N Roses slot by Net Entertainment was one of the most anticipated releases. With several months of marketing build ahead of its release, there were tons of players across the globe eager to play what became the first of the NetEnt Rocks! line of games, which includes titles Jimi Hendrix and Motorhead as well. This popular game was one of the most popular titles released in 2016, and it recently won a major award as a result.

The EGR awards are one of the most important and most respected independent awards ceremonies in the online gambling world. NetEnt won Game of the Year in these awards for 2016 for Guns N Roses, which comes after they won the same award for Spinata Grande last year. This is a pretty incredible set of wins, and it shows that Net Entertainment is easily the top slot provider in the industry today, especially considering it beat out a dozen other popular titles for the top honors.

The Importance of This Game

There were a few key things that made Guns N Roses such an important game. First off, there have been very few, if any, online slots made about specific bands, and there have never been any made with the same level of quality and attention to detail as Guns N Roses was. It is completely jam-packed with features, and it has a soundtrack that consists of high-quality versions of some of the most popular songs that the band ever released.

Net Entertainment is widely regarded as the software provider in today's industry that produces the best online slots. They consistently deliver on every aspect of the experience from the visuals to the themes and the features in the games themselves. They have been gaining momentum year after year for the past several, and the large number of awards like this one that they have been piling up really show what they're capable of. If you are looking for a great game to play and haven't checked out Guns N Roses, be sure to take a look, even if you aren't necessarily a fan of the music.