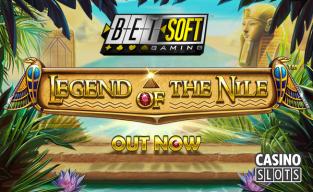 It seems like BetSoft always closes out the year with a big release, and that seems to be the case for 2017. Only a couple of weeks are left in the year, but they have announced their new Legend of the Nile slot, which seems to be their final outing for this particular year. This game has an Egyptian type of theme that focuses on the river in its name, but it has a lot of groundbreaking features that show there's a lot more to it than the visual appeal or overall motif.

They went way off of the beaten path with this game, and it shows with the six-row, six-column layout. It's based on cascading reels of symbols with exploding wins and a special feature set called God Trails. These are based on different Egyptian gods like Anubis and Ra, and the basic idea is that winning clusters of symbols fill the God Trail meters to eventually advance you towards a bonus feature.

For example, there's the trail for Isis that moves along whenever you get a cluster of Isis symbols for a payout. Your progress is saved between sessions at this slot, and when it's filled completely, you'll get a free spin bonus feature with extras. In this particular round, you can get bigger payouts with each free turn that plays out, so you can end up with some huge wins.

The Ra Trail and Anubus Trail both give you chances in free spins, progressive jackpots, instant payouts and more. The Ra Trail fills up the fastest of the three to help smooth out the volatility of the feature set along these lines.

Something we have seen from BetSoft in the past is that they really like to close out a year on a strong note because that gives them momentum heading into the new year. Moving into 2018, this company has a ton of momentum from the Legend of the Nile slot and their other releases over the past few months. They have everything in place to start off 2018 on the right foot, and all indicators suggest that next year will be a great period for them as well.

Press Release, Walk With the Gods in BetSoft's Legend of the Nile betsoft.com, December 11, 2017

Legend Of The Nile