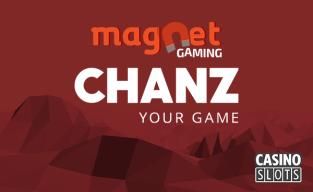 The distribution of games is one of the most important parts of the business strategy for an online casino games developer in today's industry. You can have the best games the world has ever seen, but if they never end up in front of players, you might as well have nothing. Magnet Gaming has recently shown once again that they understand the importance of distribution by signing a deal with Chanz, a social games operator, for distribution of their slot titles.

Details of This Arrangement

The Estonian operator Chanz will be taking on the entire portfolio of online slots available from Magnet Gaming as a part of this deal. How it will work is that all of the games, which are powered by HTML5 (an important point, see below), will be available through this operator's social platforms. This provides an extensive addition to what they have available while putting the slots themselves in front of tons of players who have never seen them before. It's clearly a win-win situation.

The Importance of HTML5 Distribution

The fact that this company produces all of their games in HTML5 is one of the reasons they're able to make deals like this one. All of their slots fit seamlessly into the Chanz platform because of the compatibility that comes from using this software platform. It's the same reason they've been able to make previous deals with major distribution platforms before like the Open Gaming System from the NYX Gaming Group, Quickfire from Microgaming and the CasinoEngine from EveryMatrix. These are three of the largest (if not the outright largest three) casino game aggregators out there, and it's gotten their games in front of thousands of players as a result.

What Magnet Gaming brings to the table in this deal is a ton of high-quality online slots. Names like Candy Kingdom, Gold Rush, Fish Tank and Diamond Express are among the releases that are a part of the deal, and it's a great way to get more exposure for their excellent content. This company has been at it with strong releases since they first opened their doors in 2014 with games on all platforms, including both desktop and mobile.