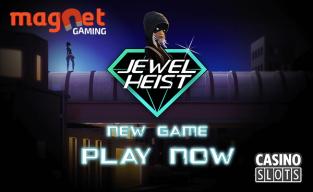 Magnet Gaming has just announced their latest slot machine, with Jewel Heist featuring a glamourous thief that players have to help snatch valuable gems from a dark vault. There's 5 reels and 17 paylines to this animated adventure and while many symbols are made up of colourful jewels, there's a series of bonus symbols that trigger a range of extra rounds, helping players get away with plenty of high-value wins.

Our villain is named as Julie, and she stands in a rain-soaked street to the side of the reels, overseeing the crime in progress. Players will win a prize whenever a colourful jewel stops across 3 or more reels on a payline, but unlike most slot machines, the sequence can start from either the left or right-side reel, doubling the chances of landing a winning combination.

There's up to 400 coins to claim when a cool blue diamond stops across a line, while the various items that Julie employs to complete the heist are the triggers for three exciting bonus rounds. The case full of stolen jewels launches the Break In game, while a hand-held device that she's using to aid her crime will launch the Game Chance feature. Night-vision goggles will lead players to The Heist, but the biggest haul comes when players scoop either of the two progressive jackpots on offer.

Jewel Heist has been developed in HTML5, for play across mobile and desktop platfroms, by this rapidly-growing developer who are making a name for themselves with the innovative designs and features of their games.

Based in Denmark, Magnet Gaming has been creating slots that mix casual and casino gaming since their launch in 2014.

Jewel Heist offers players the chance to get away with the ultimate robbery – without the risk of going to jail! We are always looking to create the most immersive titles possible as we continue to add to our ever-growing portfolio.