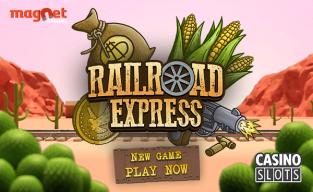 The online slots sector of the online gambling industry is the most popular game genre in the business as a whole. It's not difficult to understand why between the huge selection of high-quality games that are available and how easy it is to learn to play them compared to table games or card games that can require a bit of study, practice and complicated strategies. New releases come at a regular pace, and Magnet Gaming's Railroad Express slot is the latest offering.

The idea behind this game is that you're trying to build a track out to the Golden Mountain. As you can imagine, that's a place you want to make it to because it could mean some serious things for your account balance. Gameplay is pretty normal, and you'll be helping the station master Moe Dollar in the process with a variety of bonus features.

One thing that stands out about this game is that it's particularly feature-rich. For example, there's a chance-based bonus round, a Coal Wagon Feature, a Railroad Builder Feature and the Gold Mountain bonus round. Each of these gives players opportunities to get extra wins, and they're really what you're aiming for when you're playing with lots of small and medium wins that will keep your balance up while you try to hit one of the features. This feature-rich gameplay provides a ton of excitement, and it also ties the theme of the game together so that it makes sense and provides a cohesive experience for players.

Magnet Gaming focuses on high-quality slots, which has gotten them a ton of fans since first opening their doors. They are a fairly well-known developer that is also known for a relatively aggressive business strategy when it comes to getting their games in front of new players by making deals with platform operators. One of the biggest things that has helped the popularity of their games is how they make sure they all work equally well on a variety of desktop and mobile platforms, and it's this level of flexibility that helps them to get what they have available in front of as many players as possible.