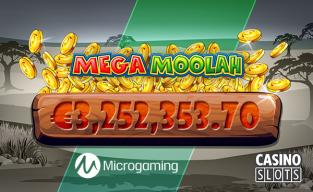 Mega Moolah is one of the top slots in the extensive Microgaming range and has paid out tens of millions in progressive jackpot prizes since it was released in 2006.

It's just been announced that the latest jackpot was won by a UK player, with a massive £3,252,353.70 scooped at Genesis Casino. The player has chosen to remain anonymous and although the jackpot was won back in November, the news has only just been announced. Like all wins across the Microgaming progressive network, the prize has been paid as a lump sum, not in installments.

Founded in 2014, Genesis Casino has quickly become one of the foremost sites, and this latest progressive win has given one of their players a fantastic early Christmas present.

''Our industry-leading progressive jackpot network has now paid out €1.1 billion and continues to lead the way, offering players thrilling and rewarding gameplay experiences.”