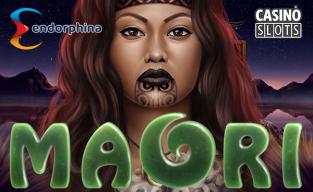 After the wildly successful launch of its Voodoo slot, Endorphina has released yet another title with a cultural theme. Their newest slot, Maori, is a beautiful take on the history and culture of the indigenous Maori people of New Zealand.

The Maori have long been known for their unique culture. They spent centuries in complete isolation, which led to an incredibly rich and deep mythology as well as a very distinctive style to their crafts and performing arts. Endorphina harnesses all of the richness and beauty of the Maori art in this slot to make it an enjoyable experience for players.

Maori is a slot with five reels, three rows and nine paylines. The slot pays left to right, and has many interesting symbols that showcase various aspects of the Maori culture.

There is an autospin option that will continue until the player manually stops it, as well as a turbo button that speeds gameplay significantly. Players can toggle both of these options at the same time to speed their chances of winning.

Each of the five top-paying symbols is a beautifully rendered 3D portrait of a traditional Maori man or woman. The remaining six lower-tier symbols are high-definition models of the unique Maori crafts.

The game also has a wild symbol of Maori voyagers on the ocean that will substitute for everything except the scatter and sun symbols. Landing a wild symbol will also double a winning spin.

The scatter symbol is a golden pendant, and if three or more are spun it will trigger an unlimited free spin game. During the game, all winnings are tripled and play continues until a blue sun shows up on the reels. There are also red and green sun symbols, both of which pay double the total bet. The red sun will prolong the free game by destroying a blue sun, while the green sun will hasten the end by adding a blue sun.

With an unlimited free spin game as well as a "double or nothing" risk minigame, Endorphina has ensured that there are tons of ways to hit it big with this slot. Combine that with the exceptional audio and graphics, and Maori is sure to deliver an excellent gaming experience.

Press Release, Endorphina Releases the Maori Slot Before the End of the Year endorphina.com, December 30, 2016