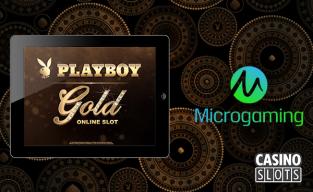 Isle of Man based casino games developer Microgaming has announced a new Playboy themed slot machine for release on 7th March, 2018. Playboy Gold builds on their existing partnership with the famous brand and compliments the original Playboy slot, as well as their live dealer studio.

Developed in conjunction with Triple Edge Studios, Playboy Gold is an innovative 6-reel slot game that has 10 symbols per reel and beautiful Playboy girls Raquel and Audrey standing to either side. Playing card symbols and colourful Playboy logo's fill these giant reels, launching a range of bonus features and extra rounds. The full details will be released closer to the launch of this game, but there's special previews at the ICE Totally Gaming event in London on 6th - 8th February 2018.

Who Are Triple Edge Studios?

Triple Edge Studios is a new developer of online casino games, exclusively providing content for Microgaming. Their games will be available at casinos using Micorgaming and Quickfire software platforms, with all titles mobile optimised, and while they currently have a small portfolio, the range is growing.

To work with Playboy again has been a real pleasure. They are one of the most recognised and popular consumer brands in the world and Triple Edge Studios has worked tirelessly to bring the brand to life in Playboy Gold