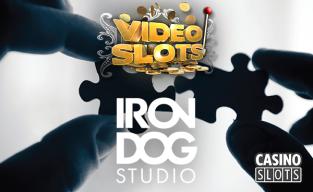 An exciting new partnership has just been anounced, with major online casino brand Videoslots to add slot games from Iron Dog Studios to their portfolio of over 2,000 titles.

The deal will see many of the top titles from Iron Dog Studios, such as Neon Jungle and Blood Queen launched on Videoslots with immediate effect, and the rest of the range added over time. This will give players access to popular games including Cherry Blast along with the newest releases, like Rainbow Wilds, which is due to hit the casinos by the end of the first quarter of 2018.

Iron Dog Studios is part of the 1x2 Gaming network, and since the compnay was founded, they have been rapidly expanding their range of slots and table games, adding unique elements to each release. Kevin Ried, the CCO of the 1x2 network has expressed his sense of achievement at getting the range included at such a prestigious online casino as Videoslots.

Videoslots already carries a huge selection of over 2,000 games, from multiple suppliers. Since the site was launched in 2011, it has grown rapidly and 2018 is looking like being thier biggest year yet, with a number of new games suppliers coming on board.

Licensed in the UK, Malta and Curacao, to reach the widest possible global audience, Videoslots has won numerous awards, including the Best Slots Operator at the 2017 International Gaming Awards.

By adding the Iron Dog Studios range to their arsenal, Videoslots are cementing their position as one of the biggest operators online.