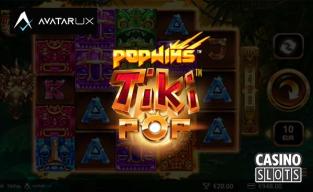 The PopWins mechanism has been a huge success for casino games developer, AvatarUX. They have just announced details of the first 2021 game to use this expanding reels system, with TikiPop set for release in the near future.

Due for release on 22nd February, TikiPop will be a Mayan-style game where tiki heads fill the 5 reels. Players will need to match at least 3 of a kind across the reels, from the left side to win a prize, and all winning symbols then ‘Pop’ to leave 2 rows behind, one on top of the other. This creates extra winning ways and the reels then respin.

This PopWins system continues for as long as new winning combinations appear, with a maximum of 33,614 winning ways when all reels expand to 7 rows high.

Any 3 or more scatter symbols will launch an exciting free spins bonus round. Between 7 and 15 games play out, but before they begin, there’s an optional gamble feature where players have a 50/50 chance to earn more games.

During the bonus round, each Pop in a series will raise a multiplier by 1x, leading to some potentially huge wins by the end of the feature.

Line Up Tikis For The Highest Prizes

Four lower-paying card symbols join the blue, purple, green, orange, and pink tiki heads, with up to 10x the stake paid out by the highest value emblems. It’s possible to win 32,000x the stake from the TikiPop online slot, and that equals 1,600,000.00 at the maximum bet of 50.00 per spin.

It comes with an average return to players percentage of 96.1%, and an exceptional hit rate of 67.1% in the base games.

TikiPop is set to explode into desktop and mobile casinos, where it joins the BountyPop, and PopRocks slots in the AvatarUX range.