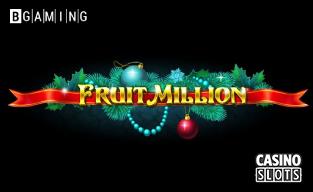 At the end of 2020, casino games developer, BGaming launched their brand-new Fruit Million slot. It’s become a huge success and they have recently announced that the game will be available in at least 5 different versions throughout the year, to reflect seasons, and big events. Fruit Million has already been supplied in a Christmas version, and more are to follow throughout 2021.

A Game For All Seasons

Next in line, the ‘Shapeshifter’ system will see Fruit Million appear as a love-themed game for St. Valentine’s Day. Other events will include Easter and Oktoberfest, with further versions due to be developed as the year progresses.

One Hundred Ways To Win

This 5-reel game has 100 paylines and packs the screen of PCs and mobiles with classic fruit symbols such as oranges, plums, and red 7s. The 7 is the top-paying symbol, worth 1500x the total bet when it fills a payline, and there are several bonus symbols to help players collect further rewards.

The lucky clover is wild and can stand in for others if needed, while the diamond and golden bell are scatter icons that pay in any positions. The wild can also expand across reels, helping to complete combinations, and any win can be gambled in an optional feature that doubles or quadruples prizes on the turn of a playing card.

Fruit Million, in all its various forms, joins a selection of popular BGaming slots such as Aztec Magic and the innovative Mechanical Orange at some of the top online casinos.