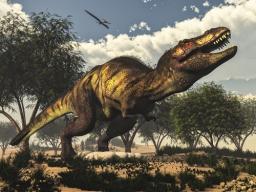 The new Dinosaur Adventure online slot is a good example of Genesis Gaming bringing something new with insane multipliers. This game uses the 1,024-ways format that always uses five reels and four rows. This is an atypical format, but they needed this many ways to win to hold all of the power of the main features in this particular title. This game is first being released with Unibet for a period of exclusivity before being released at other online casinos that use Genesis Gaming titles.

Aside from the obvious dinosaur theme, this game offers some major features. The way this works in this game is that during the free spins, you'll get wild multipliers that multiply by each other as well. That means you can get three of the 4x multiplier to get a total multiplier of 4 * 4 * 4 = 64x your original win sizes. What's more is that you only need two or more scatters to retrigger the free spins with no limit on the total number of free spins you could be awarded, so getting a ton of free turns is easy.

Another notable point about the release of Dinosaur Adventure is that it's been released in their Flash, HTML5, native iOS and native Android formats. By releasing this game on multiple channels at the same time, it makes it easier for players to get in on the latest title no matter which platform they prefer to play with. It's a great move that will get them a lot of exposure, and that's something that Genesis Gaming has really been working towards lately with their newest titles.

The thing about Genesis Gaming is that they produce both land-based slots and online slots. They offer titles with a wide range of themes and visual appeals, and the whole point of their approach is to make it easy for players to find something that they like. While they have been criticized in the past for not securing any major brands from television, movies, video games or other forms of media for their titles, the truth of the matter is that they don't need to. The quality of their work, both in terms of graphics and overall gameplay, are such that their work speaks for itself.