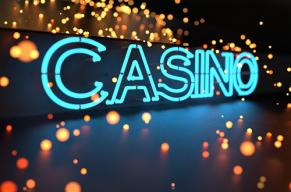 In the online slots world, one of the most important things about building attention for a game is to add to the anticipation of its release as much as possible. iSoftBet has decided to do just that with a sneak preview of their upcoming slot release Neon Reels. This game's format, graphics and a number of its features have been detailed in this preview, and it's looking like it could be their biggest release of the year if it's as well-received as it seems like it will be.

The first thing you'll notice about this new release is that it has an extremely high level of graphics and sound that come together to make one cohesive experience for the players. If you're familiar with their title Wisps, then you'll know how they can really put together a game that's real eye candy. Neon Reels follows in this game's footsteps by giving you symbols and a general theme based on neon lights and the bright, vibrant colors that make up those lights. They're used to portray a number of symbols from both the classic slot and video slot worlds.

In terms of format, this game uses five reels with three rows. Nothing else has really been released so far, but from the numbers listed on the sides of the reels, it appears to have 25 paylines. Something else that stands out is that there's a Hot Jackpot symbol, and it probably ties into the progressive jackpot that's been announced for this game. A free spins bonus feature was also noted in the preview for the game, but that's not really news since most new games have them these days. Knowing iSoftBet, however, they probably have something up their sleeve to make this feature stand out.

The upcoming Neon Reels slot is geared to come out in August of this year. iSoftBet has done a great job with this game and some of their most recent titles, and they're showing that they really know how to bring it when it comes to giving players a great combination of high-level graphics and good gameplay. We think that players are going to really enjoy this game if it lives up to the expectation that's been built along with the anticipation for its release.