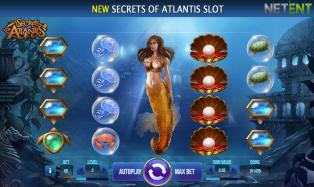 Net Entertainment has been on quite a roll this year, and 2016 has clearly been their bigger year yet. They've come out with a huge selection of new games, and their Secrets of Atlantis slot, which was announced recently, is their most recent release. This game has a number of features that come out during the regular gameplay to give players a great overall experience that's completely action-packed.

Details on This New Game

This new game has a lot to offer players in terms of in-play features without forcing them into getting into a bonus feature first. To start off, it uses a five-reel format with four rows and 40 paylines, a layout that's common for 40-payline games, and it has wild symbols that are stacked and can nudge into place. If you get the wild anywhere on the reels, then it will nudge itself up to cover the entire reel, so it's like a cross between a stacked wild and an expanding wild.

In the middle three reels, you'll see a white background behind the symbols sometimes that looks a lot like lace ribbon. When they cover all of the backgrounds for the three middle reels, they all combine to cover the entire 3x4 space to create a single symbol. The new huge reel spins to randomly determine what symbol that will be, and then it takes the spot of all 12 symbols in the center of the reels. This can also end up being a wild symbol, and that turns into tremendous winnings across tons of paylines.

Net Entertainment is definitely moving forward this year, and they've had several new releases that have consistently been at the top of the pile in terms of the quality of new releases in the industry as a whole. We're really interested to see how the new Secrets of Atlantis slot performs, and we're ready to see what else this company has to offer in terms of new releases for the rest of the year. By all accounts, they could probably take the rest of the year off work and still have the best year for new games of any of the competition, but we all know they wouldn't do that because they love to prove themselves over and over again.