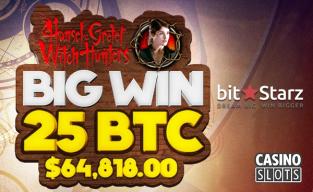 If you're an online slot player, then you know that you're always shooting for the biggest jackpot that your game has to offer. A lucky player was able to take down a big jackpot recently at BitStarz Casino, and it came on the game Hansel & Gretel: Witch Hunters. This is a great win that goes to show this online casino is consistently paying out some significant prizes to their players.

About the Big Win

The game that this lucky player was enjoying was produced by iSoftBet. This company has a history of paying out big wins at this casino, but this time, it came to the tune of $64,818. This is a pretty solid win that will definitely change the life of the lucky winner in the immediate future. However, it's just as important to remember back to some of the other big wins that iSoftBet's titles have contributed to in the past.

In particular, one lucky player was able to win big on the Diamond Wild slot before at this casino. The win was for around 150 BTC, which could come in at around $385,000 based on today's value of the cryptocurrency. That's enough to change the life of just about anyone, and BitStarz Casino was thrilled to award such a huge payout to this lucky fan.

A Variety of Games From Different Developers

This online casino pays out big jackpots on a pretty regular basis, and a bit part of the reason behind that is that they have great games from a number of different software providers. iSoftBet is just one of the numerous developers that have content running at this site. With such a wide range of games to pick from with big jackpots and prizes available, it's easy to understand why players would win pretty often here.

BitStarz Casino is not only known for having a lot of games from different suppliers. They are also known for accepting bitcoin as a deposit and withdrawal method, and they also allow you to place wagers directly in bitcoin on many games. Using this cryptocurrency has put them in a class of their own as one of the best online casinos to accept bitcoin in the entire industry, and a lot of their reputation has been based on how well they have handled that.