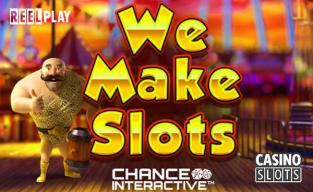 Launched in 2014, Chance Interactive is based in Sydney Australia. The company has just announced that they have re-branded and will now be known as ReelPlay.

The studio will still have the same commitment to launching fun, fresh and engaging slots into regulated markets around the world. Their latest release is Buster Hammer Carnival, a slot that has proved to be a big hit at LeoVegas Casino before rolling out to other operators.

The re-launch comes ahead of the latest ReelPlay slot launch. Details are scarce, but it will have an amazing 117,000 ways to win across the reels and will be exclusive to a major casino operator before general release.

“Our business growth will continue to be underpinned by leveraging long-term partnerships with the world’s leading operators, collaborators and aggregators. Overflowing with passion, ReelPlay create everything from the ground up, in-house.''