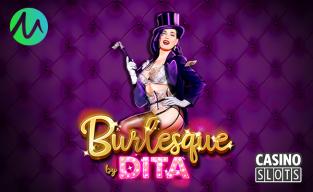 Microgaming and their partner, Aurum Signature Studios, have launched a new branded slot. Burlesque by Dita stars the famous exotic dancer, Dita Von Teese in her own game. Ms. Teese appears across 5 reels and 243 ways to win.

Champagne, high heel shoes, and jeweled playing card suit symbols appear on the reels, along with high paying images of Dita herself. She also appears in a cocktail glass as the wild symbol, and dancing in feathers in the scatter symbol.

Features of this fabulous Microgaming slot machine include a Wild Pleasure bonus, where all reels turn fully wild for a prize of 12,000x the total bet. The scatter symbol awards free spins and players have 4 bonus round options to choose from.

In the 10 Blue Dita free games, all wins are multiplied by 5x, while in the Yellow feature, she turns random symbols into multipliers over the course of 15 spins. In the Green Dita games, players get 20 spins, with the Rolling Reels mechanism removing wins and allowing new ones to drop from above. Rolls continue for as long as they form wins. The 25 White spins reward players with extra wilds in a Moulin Rich feature.

Meet Dita On PCs And Mobiles

Burlesque by Dita is a desktop and mobile game with a high volatility and average returns of 96.8%. Players can spin the reels for between 0.10 and 20.00 at the top Microgaming sites, where it joins games such as Mega Moolah and Immortal Romance.

"Dita Von Teese™ is an icon and we were thrilled to get the opportunity to work with Aurum Signature Studios and Eurostar Studios on such a glamorous slot.