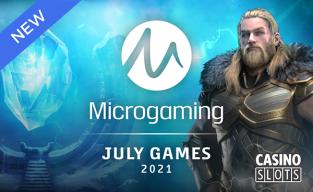 Online casino players are in for a treat throughout July, as Microgaming, their content partners, and independent studios have a huge range of slots primed for release. These new games will take players from the depths of the oceans to the world of Jurassic Park, and beyond.

One of the highlights of the new Microgaming launces for July is Thunderstruck Wild Lightning, which is an update of one of their top titles. It comes from Stormcraft Studios and plays out on 40 lines. Wild multipliers, free games and a Link&Win mechanism feature in this game inspired by Norse gods.

July 29th sees the launch of progressive jackpot slot, 9 Blazing Diamonds WowPot. It’s the work of SpinPlay Games and comes with a bonus wheel that players spin to earn free games with multipliers, or entry to the jackpot round.

Royal League Neptune’s Harem is a slot with an underwater adventure theme from Gong Gaming Technologies. It’s set for release on 26th July and comes with free spins and multipliers. Players can enjoy a Royal League feature which links to a 7x7 grid where they can win up to 10,000x the stake.

Burlesque by Dita is a licensed slot starring Dita Von Teese. Created by Aurum Signature Studios and Eurostar Studios, this game features 4 free spins rounds and a Wild Pleasure feature. It comes to desktop and mobile casinos on 22nd July.

Follow the Yellow Brick Road to the Legacy of Oz slot from 20th July. It’s the work of Triple Edge Studios and has extra features such as free spins and a HyperSpins option that respins reels to help form winning combinations.

Snowborn Games launch their Coin Bash slot on 13th July. Gold symbols feature across the 5 reels and 20 lines, with piggy bank scatter symbols worth up to 5,000x the stake.

Treasure Track comes from Gold Coin Studios and rumbles into the station on 8th July. Free spins and Royal Scatter Pays are among the features, with extra chances to win from a Connectivity Pays mechanism throughout the bonus round.

The latest title from Just For The Win is Elven Gold. This 40-line game came out on 6th July and features stacked wilds and free spins. It’s an enchanting slot where players can buy into the free games round for 50x their stake.

Towering Pays Rome comes from Games Inc. and launched on 7th July on a 3-month exclusive deal with Microgaming. The game starts as a 3-row, 15-line slot and can build to 8 rows, crossed by 65 lines. Players can then accept a feature, or wait out for an enhanced bonus.

BB Games launched Code Breaker Clusters on 7th July. It’s a cluster pays game that plays out on a 5x5 grid, and the bonus features include a Ghost Reel Modifier and Code Breaker that unlock as players’ progress.

Other slots joining the Microgaming network this month include Pirate Armada from 1x2 Gaming, Super Hot Fruits Megaways from Inspired, and the 3-reel Salvame Naranja Limon, from MGA.

It’s not just about slots this month, as a selection of classic table and card games are also set for release. These include Classic Roulette from Golden Rock Studios, which is available from 13th of July, and Microgamings’ own Hold ‘Em Poker 3 that came out on the 7th of the month.

Keep a look out for these and more at the top Microgaming casinos throughout July.

Source – Press Release - Microgaming brings the thunder with a storm of new content this July https://www.microgaming.co.uk/News/Microgaming-brings-the-thunder-with-a-storm-of-new-content-this-July