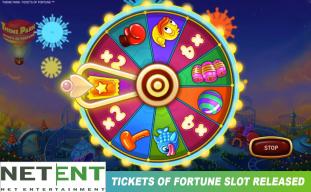 Any fan of online slots in today's industry can tell you that Net Entertainment makes some of the best titles in the business. Because of this, when they release a new game, it creates a ton of buzz in the industry overall. Their new game Theme Park: Tickets of Fortune is no exception to this, and it provides a different kind of experience than what most players are used to.

In this theme park-inspired title, you'll have tons of different bonus features that you can play based on the different games and diversions that you would see in a theme park. You'll use special tickets that you earn during the game to play these features, and this includes two main bonus features and six different mini-games that you can play from there. You'll also be able to run up extra wins during the normal gameplay with stacked wilds and a special crane claw feature that will randomly pull a stuffed animal from down below to give you an instant win.

What we can see with this game is typical of the NetEnt approach to producing online slots. We haven't seen a game based on this kind of theme with a focus on the actual carnival games in a long time, so they get some points for standing out for that. However, this also shows that in spite of the success of their Alien slot and other games, they don't need an established brand to produce a high-quality slot that will pull in a ton of players. Instead, they can focus on their own production values and atypical feature sets to give players something worth getting excited over on their own.

The Future of Net Entertainment

A lot of new games have been released for NetEnt in 2016, and there are sure to be many more as we wind down towards the end of the year. They have been riding a lot of momentum from their NetEnt Rocks series of games, but the Jimi Hendrix game faltered a little compared to the success of Guns N Roses. We'll have to wait and see if this title helps them to keep pushing along, but we don't' think it's going to be a dud either.