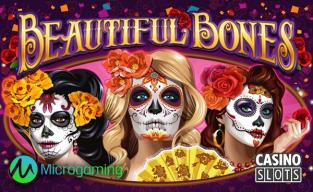 The Day of the Dead is the basis of the latest slot release by Microgaming. Released on June 7, 2017, their Beautiful Bones game is already getting attention for its strong graphics and exciting gameplay. We don't see many titles based on this particular theme, and they have taken advantage of the gap in the market by bringing a pretty high-quality title to the table.

What the Beautiful Bones Slot Offers

This game uses the standard five-reel, three-row format with 243 ways to win. This makes all of the regular symbols operate like left-to-right scatters, which drastically increases the action when compared to a more typical payline-based system. The main feature that drives your normal gameplay is a wild spin again feature, and the idea is that if you get three identical symbols in a horizontal or vertical row, then you'll get a free respin with the center reel held completely wild.

Other Features and Goodies

To give you even more ways to win, you'll have a Sugar Skull collection aspect of gameplay. When one of these skulls lands on the first or last reel, it is collected. If you get 10 or 20 of them, you have the option to take free spins or keep collecting. Once you get to 30, you're forced to take free spins. The more skulls you use to trigger the feature, the better the deal you get. With 30 of them, you'll be given 18 free spins with a huge 5x multiplier on all of your wins.

Beautiful Bones is the latest slot by Microgaming in 2017, a year in which they have been pushing hard to compete in terms of slot releases. They have been doing an adequate job, but they are still lagging behind some of the top-tier competition they are up against, and it's interesting to see how they adjust. Because they're doing so much work on the back-end, being the number one name for high-quality slots might not be their focus, but if they keep releasing games as interesting as this one, they may have a chance to take that spot anyway.