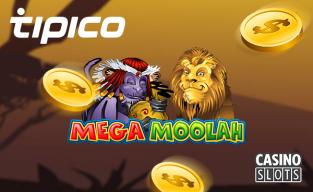 Progressive jackpots get a ton of attention in the online slots world because they represent the biggest prizes available, and it doesn't get any bigger than world record-holder Mega Moolah. This jackpot, powered by Microgaming, is available at a handful of different games, and it recently hit for the second time in the same month. To make that even more incredible, the second win happened at Tipico Casino, the same place as the first.

Details on the EUR 3.7 Million Win

The second win by a Tipico player in one month came to be worth EUR 3,722,530.12, and as always with this jackpot, it'll be paid out all at once in a single sum. This jackpot has been won several times so far this year, and it's always worth at least a million, which is why it's been dubbed the "Millionaire Maker" by many in the industry. What's more is that it's also broken its own world record earlier this year for the largest mobile jackpot in the online gambling world as well.

Why Mega Moolah is So Big

This particular jackpot is huge for a few reasons. First off, it's the main progressive for Microgaming, which in turn is one of the largest software companies in the online casino world. On top of that, they also have this jackpot linked to a few different games, which puts players in the driver's seat when it comes to deciding how they want to play. To make this even more accessible, these games are available on desktop as well as mobile, making it easy to find exactly what you're looking for, even if you're on the go, when it comes to having a chance to win a life-changing sum in a single spin.

We're interested to see if Mega Moolah can break its own overall world record this year. After breaking the mobile record, anything is possible, but it'll need to stop hitting so often and making so many millionaires to give the jackpot time to get big enough to break it.