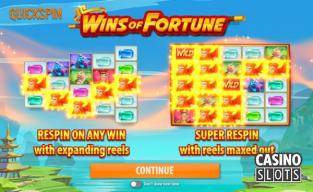 The newest release from Quickspin is sure to give players something to get excited about. It's called Wins of Fortune, and it's a 5x3 video slot that's sure to take players on an adventure since it's based on quests for glory and treasure. It has an Asian theme to a degree, but it also has its own unique flavor that gives players the basis from a fun experience.

The main gameplay is driven primarily by a respin feature. If you get a winning combination, then the grid of symbols itself can expand to give you a free respin with even more ways to win than before. It can expand to a total of five reels with five rows of symbols for the super respin feature, which gives you chances to find some major treasure of your own in the form of sizable slot payouts and prizes.

As is the case with all of their new games, Quickspin has released Wins of Fortune on the HTML5 platform. The reason for this is simple: It's the platform of the future, and Flash is getting phased out. The bottom line is that it's much more secure than Flash, and HTML5 slots are able to get better graphics and better performance out of the same devices than its platform predecessor, which makes it better suited to giving players an excellent time at their favorite games. This is a look towards the future that should not be ignored because it shows just how serious they are about building a legacy in the business.

Most players will recognize Quickspin as one of the companies that has its games distributed through the Microgaming Quickfire platform. They've been running since 2011, and they have used that time to build a great portfolio of strong titles like Dragon Shrine, Hot Sync and Phoenix Sun, all of which run in HTML5. This company produces high-quality slots that get a ton of attention from players, and that's exactly what has made them so popular in today's online casino environment.