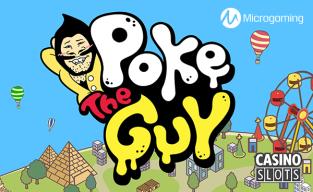 Microgaming has announced a brand new and unique game to add to their range, where a cartoon monster needs to be taken down by items such as rubber ducks and piranhas fired from an electrified catapult. It's a game filled with humour and should entertain players throughout the long summer days as they win prizes of up to 500x thier stake while saving the world from the giant beast.

Time To Save The World

The Guy is a yellow-suited ninja-type character and he's stomping on famous landmarks such as the Eiffel Tower, Pyramids and Mount Rushmore. Players get to choose from a range of objects to fire from the catapult, with other options including trees and knives available, and if they hit The Guy, a prize is won. The object chosen determines the bet size and corresponding payouts, which gives players flexibility in how much to wager on each attempt.

A simple tap on the slingshot sends these strange items heading in random directions as The Guy pulls faces and strikes poses around the target area. Players win random amounts when they score a hit, while The Guy falls apart, or looks shocked as he's blown up.

The fun animations play out across mobile devices in portrait mode or desktop computers, so the silly antics can be enjoyed anytime and anywhere. Poke The Guy is available now at Microgaming and Quickfire casinos.