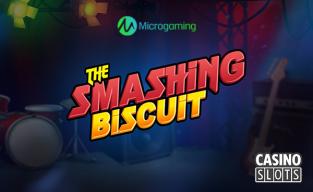 The Smashing Biscuit is a fun new slot that follows the adventures of the three Biscuit brothers as they play in their rock band. It's been exclusively developed by PlayPearls for Microgaming and is now available at online and mobile casino sites that use software from this major supplier.

The Smashing Biscuit slot comes with five reels and 20 paylines. The cartoon style symbols include guitar-shaped playing card icons, the hapless band members and their long-suffering Dad. A guitar and amp sit to one side of the reels, and another amp, with a dial that goes all the way up to 11, is seen on the other side.

A golden wild symbol acts as others to complete lines of matching symbols across a payline. It won't be able to act as the Battle of the Bands symbol though, as this triggers the main bonus feature when it lands in any 3 or more places at once.

The Battle of the Bands feature consists of 10 free spins, during which any of the Biscuit brothers who are in a winning combination will stay locked in place and turn into extra wild symbols for the rest of the round. The free games play out on a 4x3 grid, with special symbols, and they can be retriggered by more scatter symbols.

There are also several in-game bonus features to enjoy. Each win turns the dial on the amp, which raises a multiplier. The multiplier keeps rising if players land wins on successive spins and goes down by 1 on losing spins.

Dad can also walk across the reels. He will award a random cash prize, win multiplier or give lucky players immediate access to the Battle of the Bands free spins.

Players can enjoy a performance by The Smashing Biscuit for stakes between 0.20 and 100.00 per spin. This mobile optimised slot has a generous return to players percentage of 97.52%

“We are delighted to add The Smashing Biscuit as the latest exclusive game to Microgaming. Bringing plenty of exhilarating excitement from the very first spin,''