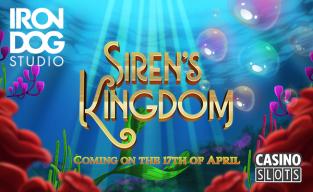 Siren's Kingdom is an undersea themed online slot machine that's due to be released on 17th April by Iron Dog Studio. Seashells, starfish and mermaids fill these aquatic reels, while expanding wilds and a free spins round with sticky wild symbols can help to fill bankrolls.

It's a 5 reel game, where 3 rows of symbols are crossed by 30 paylines. Lower value wins are made by seaweed-covered playing card symbols, while the starfish and a range of shells return the higher prizes. A mysterious mermaid is a wild symbol, who will expand to cover a whole reel when she stops on the top row, with the chance to land multiple mermaids at once leading to some high winnings.

A golden octopus symbol landing in any 3 places will lead you to 14 free spins, while 4 of this creature will launch 25 spins and if 5 or more of this symbol appear at once, players get rewarded with 36 extra games. In the bonus round, a purple mermaid is a special wild symbol that will expand outwards in both directions for a second spin before vanishing back into the depths. It's a feature that can make the free spins especially lucrative.

A high RTP of over 96% and the potential to stake up to 150.00 per spin across mobile and desktop platforms, could help those players who brave the magical waters of the Siren's Kingdom to come back up with some great treasures.

The developer is part of the 1x2 Gaming network and has been releasing games since 2017 from their base near Brighton, England. They aim to give each of their slots some innovative features, while table games such as Baccarat are given unique designs to make them stand out across the network.