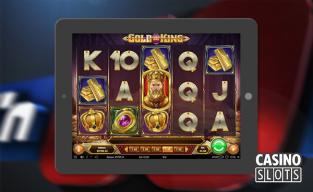 If you know your mythology, then you know that King Midas was a man who asked for the ability to turn anything he touched into gold so that he could have the most wealth of anyone in the world. However, his plan backfired when he realized the downside of not being able to touch anyone without killing them via gilding. Play'n Go has captured the not-so-morbid side of this story with their newest release with the Gold King slot.

This game has five reels, three rows and 20 paylines with a focus on giving players hits from the main pay table along with symbols to help increase the hit-rate. This concept is assisted by a large number of stacked symbols, which are a key point in the gameplay. The idea is that you can get lots of hits on the same spin, which smooths out the volatility and gives you bigger payouts than you'd expect from just looking at the pay table itself.

There's a free spins mode along with a super spins mode, each of which gives you extra ways to get paid. The Super Stacks feature in particular gives you a chance to have a symbol that fills 12 consecutive spots, and this takes the stacked symbol concept to a whole new level. On top of that, you can get random super stacked symbols in the regular gameplay as well. This all comes together to have a focus on golden symbols that stack to give you great payouts.

Play'n Go had a very good 2017 with a number of key releases and a lot to be happy about. However, some people have expressed doubt in them taking advantage of their momentum sufficiently in 2018. These naysayers have been proven wrong with Gold King and other news from this company, and it goes to show that they're looking to make this year even better than 2017 was for them. We expect a number of new releases throughout the rest of the year that cover a wide range of different themes and gameplay styles, which is exactly what made them so popular in the first place.