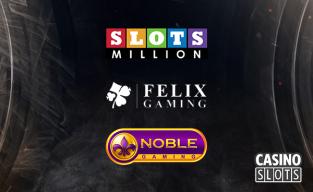 SlotsMillion has become famous for the vast number of games featured on their site, and while it's not quite a million, the numbers are rising, especially with the latest deal signed with Noble Gaming and Felix Gaming, who will provide games exclusively to the casino.

Who Are Noble Gaming And Felix Gaming?

Noble Gaming is based in the UK, with branches in Bulgaria and the Czech Republic, where they have been developing tailot-made games for clients for 25 years. They also produce gaming equipment and servers, video lottery terminals, multiplayer games and a wide range of slots for online, land-based and mobile casinos.

Felix Gaming is also a UK company that has been operating for around 20 years. They moved into the online gaming business in 2016 and have released a range of exciting games and softwrae solutions.

About The Exclusive Deals With SlotsMillions

Games from these companies will be available exclusively to SlotsMillions players, joining the vast collection that's been drawn in from many of the top suppliers in the world. They sought out games from innovative developers that could be integrated with the existing range and that wouldn't be found elsewhere. The Noble Gaming and Felix Gaming exclusive slots are available now.