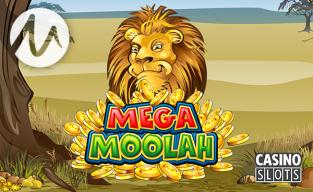 Mega Moolah is one of the most famous online slots in the world. It holds the Guinness world record for the largest single progressive jackpot prize and last week, paid out jackpots twice within 24 hours. The lucky players were both at Casino Rewards brands when they struck the jackpots on 5th and 6th March.

On Tuesday, March 5th, a player who has chosen to remain anonymous, hit the jackpot and took home an amazing E11,546,388.15. This is the fourth biggest payout ever from the Microgaming progressive network.

On 6th March, another player, who had made just 33 bets that day, scooped E2,2201,120.31 on Mega Moolah. The two back-to-back wins mean that the Microgaming progressive slots have created a total of 71 millionaires, cementing their position as the most rewarding in the industry.

This African wildlife themed slot plays out over 5 reels and 25 paylines. The cartoon style symbols include a lion which is a wild symbol that helps to complete combinations by acting as others. It doubles the value of any wins that it creates, while a monkey symbol triggers 15 free spins, with all wins tripled in value. However, this game is all about the progressive prize, which is won at random.

There are 4 levels of jackpots, with players spinning a series of wheels to move through each stage. Anyone who reaches the fourth stage and sees the wheel land in the right position will take home the top prize.

Microgaming continues to lead the way with more life-changing wins on the network. The fact that these two millionaires were made on consecutive days really demonstrates the strength and popularity of