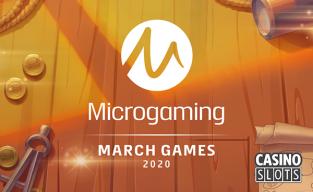 Microgaming has announced a raft of new games rolling out across their platform during March. The new titles include slots themed around leprechauns, cyberpunks, and pirate monkeys. The games come from their network of independent partner studios and content providers.

Triple Edge Studios launches Attack on Retro, a slot themed around a steampunk-style city that is under attack by robots. Two heroes, Billy and Jesse defend the city across 5 reels and 10 paylines. Stacked wild symbols help to complete combinations of retro-styled symbols in this enjoyable slot.

9 Pots of Gold is a new Irish-themed game from Gameburger Studios that comes out on 10th March, just a week before St Patricks Day. The 5 reel, 20 line slot features a bonus wheel, free games and a special Pot Pays mechanism.

Developed by Just For The Win, exclusively fro Microgaming, Treasure Skyland is set in the clouds, where players find a secret land of islands and cities. Pirate monkeys search for gold bananas, helping players to peel open features such as win multipliers, a prize-picking round, and symbol upgrades.

Treasure Heroes and Mining Fever both come from Rabcat. Players discover a 5x5 grid of symbols with a cluster pays mechanism with Treasure Heroes. Special features such as the Moving Wall and Treasure Chamber free spins are among the bonuses of this fantasy-themed game. Mining Fever is a 5-reel, 243 ways to win game, starring dwarves who unearth a series of rewarding features.

It's not just slots scheduled for release this month, as Switch Studios are launching Classic Blackjack Six Deck for the Spanish market.

Alongside slots from partner studios, a number of developers have new games being integrated to the Microgaming platform in March. Examples include Alchemy Blast from Skillzz Gaming, Gladiator Arena from Booming Games, and Twice the Diamonds from Ainsworth.

“Continuing our commitment to providing our customers with a strong and varied games roadmap for the year ahead, we are delighted to add another mixture of exclusive and non-exclusive games to our content aggregation platform this month.