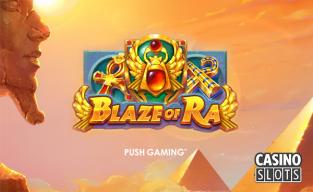 The topic of ancient Egypt is an ever-popular one for online slot machines to follow and Push Gaming have released a new game that's sure to become a classic of the genre. Blaze of Ra is a 5-reel slot where symbols are in 4 rows that are set against the desert landscape and watched over by the Sun God Ra himself.

Classic symbols of the era are featured, including the Ankh, Eye of Horus and a lotus flower, while decorative high-card symbols fill out the reels. The great Ra is a bird-headed character and he's the wild symbol which will be able to substitute for others to help complete winning lines. If he's seen anywhere on the top 2 rows a special Nudging Wilds feature is triggered, where this symbol moves down 2 places to give players a better chance of collecting a prize.

Richer Reels In The Free Spins

A jeweled Scarab Beetle takes players to a free spins bonus feature whenever it stops in 3 or more places at once. Each Beetle will reveal a number and these add up to the number of bonus games that will then play out, but to help make this a more rewarding round, Ra will appear in a Wild Blaze feature that sees him filling reels 1, 3 and 5 for some guaranteed winning spins.

More Scarab Beeltes will award further free spins when they appear in any bonus game.

Blaze of Ra is available now and can be played across desktop PC's as well as on mobile phones and tablet computers. It's been beautifully designed and has all the features, style, fair play, reliability and high retruns that London-based Push Gaming are known for.