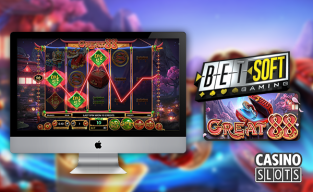 Different online casino software companies in the past have come up with special lines of slots to try to differentiate themselves from other companies. In the case of BetSoft, this has come in the form of their Slots3 line, a line of games that consist primarily of graphically intensive, 3D video slots. They have recently released the newest game in this line, and it's called Great 88.

Details on the Great 88 Release

This title is based on an Asian theme, and it has the super-solid 3D graphics that the Slots3 line is known for. There are a number of different bonus features in this game, and it's designed around a five-reel, three-row, 30-payline format. There are special Lucky Boxes that guide a lot of the gameplay, and they can give you special chances for features that will give you a ton of value. These features include special wilds, different-colored coins that perform functions like giving you free spins or multipliers on your wins, or the golden dumplings that give players spins on a Bonus Wheel. This gives you a chance for a spin on the Mega Wheel, that gives players a chance to win a life-changing sum of money.

Along with the desktop release of this new title, players can also get in on the action with Great 88 ToGo, the mobile version of this title, and a member of their ToGo mobile product. The mobile version is a part of their extremely flexible mobile selection, which gives players the option of using just about any operating system, smartphone or tablet out there, and this includes Windows Mobile, Android, iOS, Blackberry and more.

BetSoft has an approach towards their games that is focused on quality instead of quantity. Companies like this one helped to bring along the current era of online slots, which is based on giving players the best experience possible in each individual game instead of trying to throw a ton of games at them to see what sticks. They've been pushing their Slots3 line since it first started around the middle of 2013, and since then, it's been widely recognized as one of the best series of games in the industry.