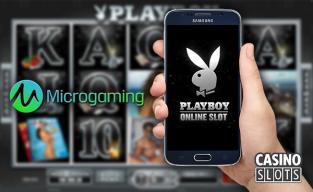 Microgaming has been known as one of the biggest, if not the single biggest, online casino software developers in the history of the business, and that's since day one. They provided the software for the very first online casino back in the mid-1990s, and they have pushed hard for innovation on the instant play and mobile levels especially. They're showing their commitment to mobile players right now by releasing a mobile version of their popular Playboy online slot.

Why Convert This Slot to Mobile?

The Playboy slot has been extremely popular since it was first released years ago. At the time, they didn't automatically release mobile versions of every slot release like they tend to do now. Instead, they would normally release the regular, downloadable version of the game, and later on if it proved popular, then they might release a mobile version. The reason for that is that there simply weren't enough mobile players at the time to always dedicate resources to it like there is now.

The popularity of this slot has not wavered since it was first released, and it's a great example of a slightly older game that has kept its spot in the industry through a combination of a great concept and solid gameplay. You would think a company might just rely on the Playboy brand to sell the game, but the fact of the matter is that it's completely jam-packed with features, and that makes it an awesome choice for players.

Play This Game at Golden Riviera

If you're looking for an online casino with an excellent reputation where you can play this game, then Golden Riviera is a good choice. They have over a decade of experience in the industry, and they've used that time to build up an excellent reputation that consists of solid customer service, fast and reliable cash outs, and all of the newest releases as quick as anybody when it comes to the Microgaming software.

They also have a solid mobile interface that allows you to take your play with you anywhere you go. With the new mobile version of Playboy, you'll be able to play on iOS, Android and any other popular operating system thanks to their web-based mobile platform.