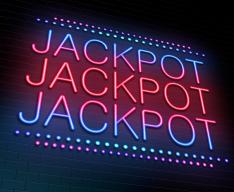 Progressive jackpots were originally designed to give chances for massive payouts without the casinos have to keep a separate cash reserve on hand. The way they work is that a small portion of each wager is added to the jackpot until it is won, and then the jackpot is reset back at the starting value. The casino really only pays out the starting value out of pocket since the rest of the jackpot comes from player contributions. Mega Moolah is one of the most well-known of these games online, and it recently triggered an enormous win.

This win was reportedly worth about $13.2 million, though there hasn't been confirmation from Microgaming at this time. That would make it the second-largest progressive jackpot win ever awarded online. To put this in perspective, the average win on this game is only about $4.1 million. While we say "only" compared to how large it was this time, it's worth pointing out that this is a pretty large win in and of itself, and the jackpot starts out at $1 million when it's reset.

About the Mega Moolah Jackpot

Mega Moolah is an online slot that started the Mega Moolah jackpot link, which is actually connected through a handful of different games. This includes The Dark Knight and the Mega Moolah offshoot games. This is Microgaming's largest jackpot, and it's generally considered one of the two largest progressive jackpots in the entire industry. That's fitting because the most recent win for this game is one of the top two ever won in the history of progressive jackpots in online gambling.

Microgaming is known for having a very wide range of online slots, and a lot of those have progressive jackpots. On top of that, they also have video poker titles and table games that include progressives, though they aren't as large as the top one for Mega Moolah. We say the top one because there are a total of four different progressive jackpots available in this game, and that means there are more ways to win. The larger jackpots hit less often, but when they do, it's always for a life-changing sum of money like the whooping $13.2 million that we've seen from this recent win.