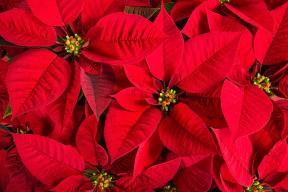 The Flowers online slot by Net Entertainment might not have flashy 3D graphics or branding from some popular television show, book series of video game, but it delivers in the gameplay and fun departments, and that's where it counts the most for many players. One weakness of this game, however, is that the theme is more or less "borrowing" from the Plants vs. Zombies line of games, and it gets a little bland after a while, but NetEnt is freshening this game up with a new Christmas theme.

The Flowers online slot uses a 30-payline format with five reels and three rows. This is well within the normal range of what's available in today's video slot world. There are a lot of betting options as well with coins that range from $0.01 to $0.50 apiece and the ability to bet anywhere from one to five coins per payline. There are a lot of symbol-based features that really drive the gameplay, and this includes double symbols and stacked wilds.

The double symbols are really important. The way this works is that a double symbol counts as getting two symbols in a row. For example, if you were to get an ordinary flower symbol, a double flower symbol and another ordinary flower symbol, that would count as four of a kind instead of three of a kind. In essence, this gives you bonus payouts bumped up to the next tier in a lot of cases. Combine that with the stacked wilds, and you have a recipe for a lot of big payouts and multi-line wins on the same spin.

The new Christmas theme on this game is a pretty good idea, and it gives players an opportunity to try out an older game from Net Entertainment with what amounts to a fresh paint job. Because the gameplay has already been outstanding, they've basically just improved the appearance, and shoring up the weaknesses of their game library is something that's brought Net Entertainment a lot of success in the past. As you can see from this new edition of the Flowers slot, you'll get all of the same features including the free spins bonus feature wish a 3x multiplier. Extra free spins can also be added on during the bonus feature for even more added value.