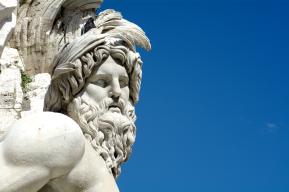 Microgaming is known for coming out with a lot of games on a regular basis, and it seems like they have several new releases each and every month. That's definitely the case for October, and it starts off with a special pairing of two games in the Titans of the Sun series. The first is Hyperion, and the second is Theia. These are related figured from Greek mythology, and they've been put together in a set of related titles along those lines.

Titans of the Sun

In Greek mythology, Hyperion and Theia were siblings born of Uranus and Gaia who were also parents to Helios, god of the Sun (and a number of other important deities). Along these lines, they are considered the Titans of the Sun in this series of games. They are both five-reel, three-row titles that use 15 paylines and that have similar themes and features. The main difference is that you get a higher top jackpot in one while the other has a higher multiplier in the free spins bonus feature, so this offers some balance without them being complete copies of each other.

A feature that's debuting for Microgaming in these games is the stacked mystery symbol. The way this works is that the mystery symbol is shown stacked on every reel. What happens with this feature is that, once the reels stop spinning, the mystery symbols will all convert over to one randomly-chosen symbol, the same symbol on all reels. This gives you a lot of opportunities for sizable multi-line wins if they line up correctly, and it's a major component of the overall gameplay.

Some other new releases are coming out in October, and this includes the Scary Friends online slot. This game uses five reels and 25 paylines with cute, fluffy aliens that show up just before Halloween. On top of that, the Golden Era online slot is having its mobile verison released. This means that you can take the old-style Hollywood action with you wherever you want to play and get in on 15 paylines of action with massive payouts available if you hit the right combinations.

If these games sound like something you'd like to experience, then we suggest you try them at Golden Riviera Casino.