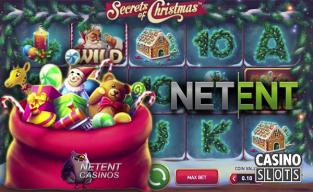 Holidays have been used as the themes for online slots for quite a while, and from October through February each year, we often see new releases for Halloween, Thanksgiving, Christmas, New Years, Valentine's Day and other holidays that happen around this time of year. NetEnt has recently announced the upcoming release of Secrets of Christmas, a new game based on what most consider to be the biggest holiday of the year.

Details on This Release

It's supposed to officially come out on November 30, and that will be just in time for December to start the following day. You'll have a few weeks between the launch date and Christmas to get in on the action, but if it's anything like other holiday-based titles from this software developer, then you'll feel comfortable playing it during any time of the year. This is because they focus primarily on graphics and gameplay instead of just trying to get a cheap audience for a few weeks off of something topical.

From the previews that NetEnt has released, it's looking like we'll have 243 ways to win based on bet sizes of 25 coins. As usual, you'll be able to bet up to 250 coins by playing up to 10 betting levels. And it would appear that the usual coin size selection starting at $0.01 is going to be available as well. It has a fun Christmas theme with card rank symbols based on Christmas wreathes, and scatter symbols give players free spins with special bonus features based on choosing from a selection of gifts that are sitting in a crowded room.

In our other news reports, we've noted before that Net Entertainment has had a tremendous year in 2016. They released the first few titles in their NetEnt Rocks! line with Motorhead, Jimi Hendrix, etc., and this got them a tremendous amount of attention. They've had other big releases, and they have won even more awards. If they keep this up with Secrets of Christmas and push this momentum along like they have been, then it's clear that they are going to hit 2017 at full steam and completely dominate the competition.