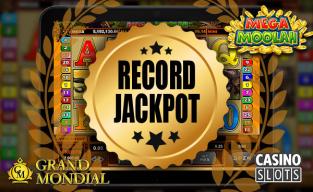 On Friday 28th September 2018, an unnamed Grand Mondial Casino player scooped an incredible progressive jackpot prize of €18,915,872,81 for 0.75 stake on the Mega Moolah slot machine. This Microgaming slot is already famous for paying out massive awards, but this is the biggest ever.

This beats the €17,879.645.12 paid out by Mega Moolah in 2015, which is recognised by the Guiness Book of Records as the 'Largest jackpot payout in an online slot machine game.' The new jackpot has yet to be confirmed, but it adds to the €948,000,000 paid out by Microgaming progressive slots to date.

The winner has chosen to remain anonymous and like all recipients of Microgaming progressive awards, will receive their prize as a lump sum rather than in annual payments. They were playing at the mobile version of Grand Mondial Casino on an Android device when the jackpot round was triggered and they scooped this massive award. It's the sixth time that players from the Casino Rewards group have won the Mega Moolah jackpot.

Anticipation had already been building to a fever-pitch as the jackpot rose through the multi-million levels, surpassing the previous record. It's now been reset to the seed level, rising in value until the next lucky punter claims the prize.

For Grand Mondial Casino to land this gigantic jackpot, and be part of Casino Rewards group, which has had so many Mega Moolah winners in the past, we just couldn't be prouder and more pleased.