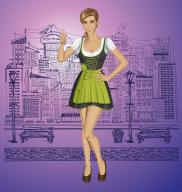 New games are a big part of what gives any online casino software company momentum, and Genesis Gaming is making a new for themselves recently for turning up the frequency of their new games. The two newest titles by this company are Bier Fest and Escape Artist, and this just goes to show that they're keeping the pressure on the rest of the online casino software development competition. This means more new games for players, so it's a win-win situation.

HTML5 is going to be the platform that most online casino play happens on within the next few years, and companies like Genesis are staying ahead of the pack by making sure they're releasing many of their newest titles in this format. This is the case with Bier Fest, a game that's based largely around the Oktoberfest German beer festival that's right around the corner. It has expanding wilds, stacked wilds, a pig race and an instant win feature where you pick different mugs.

The Escape Artist game was released via HTML5 along with the Adobe Flash platform and native applications for iOS and Android. This game is about the magician Larry Linguini, and it uses five reels with 50 paylines. Larry makes a deal with the devil, and he ends up being the greatest escape artist in the world. This title chronicles his tricks and adventures, and it has a number of different wild-based features in addition to a chance to win free spins. It's a fun combination of drama and comedy, and it has a bit more of a plot than a lot of games that are released these days.

The Bier Fest game is going to be available via the Quickfire platform, and it just goes to show that they're continuing to expand. While their strategy mostly consists of getting their titles on other software platforms, they aren't a company to sleep on because they've been showing impressive growth with their new games over the past 18 months. They are definitely bringing it with high-quality games released on an aggressive schedule, and this is why they seem to have the potential to be one of the biggest names over the next few years.