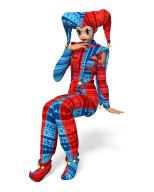 Progressive jackpots build up the largest individual payouts that can be found in the online casino world, and that's no surprise considering that some of them can build up for weeks or months before triggering and paying out to a lucky player. Many people enjoy these types of games because of the chance to win a life-changing payout in just a single bet, and that's exactly what happened to one Norwegian player lately at EuroSlots.

About the Major Jackpot Win

The game in question was Joker Millions, a progressive by software developer Yggdrasil. This lucky player was only in on the action for less than 30 minutes when the payout was triggered and €720,000 came his way. This is a great win and just goes to show that Yggdrasil is in the habit of making some pretty big winners. Joker Millions is one of their most popular games, and it's easy to see why after this major payout was triggered.

Joker Millions Inside Out

Joker Millions uses a very atypical format with four rows and ten paylines. This makes it fall somewhat between the classic slot genre of three-reel games and the video slot genre of five-reel titles. The symbol set is more in line with the classic slot side of things with jokers, bells, and other similar symbols from that era of games. However, the features are more from the video slot side of things, and this includes the major progressive jackpot that the lucky Norwegian player was able to take down. The end effect is that this game is perfect for any type of slot fan.

Yggdrasil makes a lot of games like Joker Millions that give players an excellent overall experience. They are all about building quality over quantity, so while they might not have the largest game selection out there, they definitely have some great titles that players absolutely love. This big payout on Joker Millions is a good example of how their titles are getting more and more attention, and we'll probably see more big wins on their titles in the news sooner rather than later. In any event, they're great games to try, and players all over the world getting in on the action with their games proves their popularity.