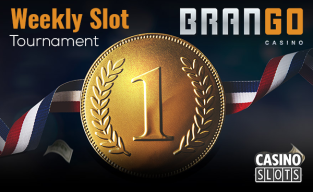 Slot tournaments have gotten more attention over the past few years than ever before. Players really like the idea of competing against other players instead of just competing against the house to see if they can hit a winning streak at the right time. Casino Brango is taking advantage of that popularity by running four tournaments this September with no entry fees and chances to win real prizes.

Details on These Four Events

All four of these tournaments have the same basic rules. There is no entry fee, and first place wins $50. You have to play on the specific game that the tournament is for only, and wagers on other games do not count. Players can cash out worth up to twice their winnings with this prize, and they need to be wagered at least once before you can request a withdrawal after you've been awarded your winnings. You'll also only be able to play one of these events between deposits, but even a minimum deposit will qualify you for the next tournament.

The Future of Tournaments at Casino Brango

These weekly events aren't the only tournaments that Casino Brango has been running. They've been really exploring the popularity of slot tournaments events like this one, and they've been having more and more of them go on with both weekly and monthly editions. Players who like slot tournaments should check out the rules of these events before they dive in, but if they seem favorable to you, then you may want to hop on and check them out because they're giving away the equivalent of free money for people to play some of their favorite slots with these prizes.