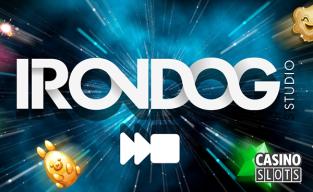 Speed is an issue with slots that has been dealt with since the very first mechanical slots were invented. Now in the online world, players frequently have different speeds to choose from for the initial play. They often get chances to "stop" the reels early, which doesn't actually change the outcome of the spin, to speed things up as well. However, that usually involves a lot of fast clicking, which can get old really quickly. Iron Dog Studio's latest feature release will solve this issue for a lot of players.

The way that their new adaptive fast-play feature works is that it senses when players are trying to push the game along as quickly as possible. This could happen by repeatedly pressing the stop button for the reels on several spins in a row. When this happens, it prompts the player to ask if they would like to enable a fast-play mode for the game. This speeds the game up substantially and gives players the type of gameplay they were looking for without having to wear their mouse out in the process.

Why Don't Games Start in This Mode?

One question people might wonder is why games don't start in this mode to begin with. The reason is simple: Most players enjoy the anticipation of the reels spinning before they see what the results are, and it's a major part of the experience for them. If you take that away by default, then it will go against what the majority of players want as an important part of their gameplay experience.

With that having been said, the adaptive nature of this feature is what's so incredibly important about it. The players who do want things to go faster are able to do so quickly, but it's not forced on everyone. That makes it a very important feature in the sense that it allows everyone to get what they want out of the situation and out of their slot experience. If Iron Dog Studio continues to push forward features like this in the future, then we'll see them continue to rise in popularity even more than they have done so far.