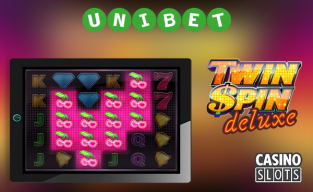 The Twin Spin Deluxe online slot is going to be exclusive at Unibet Casino for a total of six months before other operators have a chance to release it to their players, and in honor of this release, they're running a pretty big promotion with several different ways to win.

Another way to win is with a special €50,000 slot tournament. Running from September 6 through the beginning of October, players can win up to €10,000 for first place in this event. The top 500 players in this tournament will win cash prizes, and players from 501st down to 10,000th place will all share a quarter million (250,000) free spins. That's a tremendous amount of value being given away. Wagers on the original Twin Spin and the new Twin Spin Deluxe games are all that count for this tournament.

A two-carat diamond worth around €10,000 is being given away by Unibet Casino in a raffle as well. If you wager €1,000 total on these two games from desktop before the end of the month, you'll get one ticket to the drawing. You can pick up an additional three tickets if you wager another €1,000 on these two titles from the mobile app. This is a great example of an atypical promotion that really stands out, and it's a great way to win something of major value just by playing the newest titles at this casino.