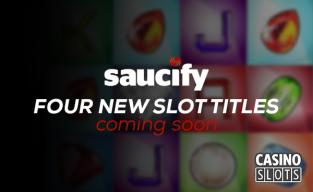 New slot releases are a critical part of any online casino software developer's overall package for players. Staying on the cutting edge of what's available in the industry is extremely important, and a failure to do so will leave a software company like this coming up short in a major way. Saucify has recently announced a number of new releases coming up in the fourth quarter of 2017, and they look like great additions to their already impressive lineup.

Coming up for release in September is the Stones & Bones slot. This game is set in the time of dinosaurs and cavemen, and it's based on a cartoony visual style. October will have players seeing the release of the Sirens Serenade slot, based on the sirens from Greek mythology. This game uses 3D graphics with a focus on action, and you can already see that there are a lot of differences between these releases for the fourth quarter.

November will see the release of the Tanzakura slot. This game is based on Japan in the 14th century, and it tells the tale of two Samurai who are out trying to capture a magical crane. This theme is older, but the excitement is very serious. Finally, December will have the release of Mrs. Green's Plant Emporium. Mrs. Green has a lot of interesting plants in her collection, many of which are carnivorous. This game also has 3D graphics, and the experience is much darker with a high level of immersion with great visuals and a solid soundtrack.

Saucify usually averages between 12 and 15 new releases each year. This isn't the most aggressive release schedule we see out in the industry as a whole, but it's probably above-average for companies with a portfolio of the size of theirs. They are making steady growth with their number of games, and as you can see from the four titles that they are releasing between now and the end of the year, there's a lot of variety. This company has been doing a great job with coming out with bigger and better games in the past couple of years, and it looks like they plan on continuing that streak.